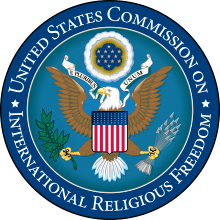 The U.S. Commission on International Religious Freedom (USCIRF) has recently released its 2018 Annual Report, which documents violations of religious freedom around the world, and makes recommendations to the U.S. government on how this fundamental freedom can be more effectively protected worldwide. Once again, the USCIRF has included Turkey among its Tier 2 violators — that is, countries where religious freedom violations are systematic, ongoing, and/or egregious.

The USCIRF’s 2018 Annual Report on Turkey notes that “in 2017, the state of religious freedom in Turkey worsened.” Among the signs of this deterioration, the report states, is the fact that most of Turkey’s “longstanding religious freedom concerns remain unresolved, including the return of expropriated minority properties, the delay in providing dual citizenship to Greek Orthodox Metropolitans so they can participate in the church’s Holy Synod, and equal funding for religious minority community buildings from the public budget.”

However, “the continued unjust detention of Protestant Pastor Andrew Brunson since October 2016 has had a chilling effect on Christians living in the country.”

The Erdogan government also continues to place unjust pressure upon the Ecumenical Patriarchate: “the Turkish government continued to dictate that only Turkish citizens can be members of the Ecumenical Patriarchate’s Holy Synod, which elects the community’s Patriarch. Since 2010, however, only 30 foreign Metropolitans have been approved for dual citizenship, which the community contends is unreasonable interference with the internal election process of the Patriarchate. Additionally, the Greek Orthodox Theological School of Halki remains closed, as it has been since 1971, due to a constitutional decision to shut down all religious and theological schools at the time. However, the Ecumenical Patriarchate contends that since then, thousands of imam-hatip schools have been opened, and therefore Halki Seminary should also be allowed to reopen for the sake of the community’s survival.”

Meanwhile, “lack of legal status for the Patriarchate, like all religious groups, continues to prohibit the community from registering property in its name. Instead, the Patriarch has been required to register property in his own personal name.” And “in mid-2016, the Patriarch requested a meeting with President Erdogan to discuss his community’s concerns; by the end of the reporting period, there had been no response.”

The USCIRF recommends that the U.S. government “press the Turkish government to fulfill private and public promises that the Greek Orthodox Halki Seminary would be reopened, and to permit other religious communities to open and operate their seminaries.”

Turkey is unique among the violators of religious freedom listed in the USCIRF annual report in being a NATO ally of the United States. Accordingly, we urge the U.S. government to link Turkey’s continued good standing in NATO with an improvement of its treatment of religious minorities, and in particular with an end to its ongoing discrimination against and harassment of the Ecumenical Patriarchate.

We ask all Greek Orthodox Christians, as well as all other Christians and people of good will, to bring these issues to the attention of their elected representatives, urging them to make the improvement of Turkey’s record on religious freedom a key priority in all discussions related to Turkey’s alliance with the United States.

Above all, we fervently pray for our suffering Christian brothers and sisters who are persecuted simply for professing their faith and take this opportunity to express our abiding and profound gratitude to our spiritual fathers, His All-Holiness Ecumenical Patriarch Bartholomew, His Eminence Archbishop Demetrios, Geron of America, the venerable Metropolitans of the Holy Eparchial Synod and to Fr. Alexander Karloutsos and our Brother Archons for their devotion to the Holy Mother Church of Constantinople.